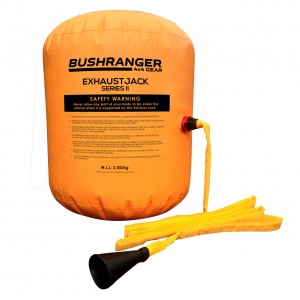 Off-roading can obviously result in various situations where your vehicle could become stuck. If you find your vehicle unable to get free from a sand trap, a soggy mud hole, or a deep snow drift, a traditional jack may not fulfil the purpose you seek. That is where an investment in an exhaust jack is so beneficial. These jacks are essentially inflatable bags that are capable of bearing the weight of 8,800 lbs. This invaluable recovery tool is able to lift one side of a car 31” inches off the ground.

An exhaust jack comes with a hose that is connected to the tailpipe of the trapped vehicle while the engine is turned off. Once the engine is started, the exhaust from the tailpipe is used to inflate the jack. This ingenious product was produced when it became apparent that traditional jacks are impossible to use in some off-roading situations. The large footprint of this kind of jack is more effective for fighting against sinking. For the most versatile use possible, it is designed to be able to lift the car under the side of the body instead of needing to be positioned under the car’s axel like a standard jack requires.

While the exhaust jack is certainly a dependable piece of equipment, you want to exercise caution when using it. Never allow any part of your body to be positioned under the car when it is being supported by the exhaust jack. Also, it is not meant to be used for car maintenance or wheel replacement. No one should be in the car when it is being jacked, and if there is a trailer attached to the car that is stuck, it should be disconnected before the exhaust jack is used. Never use the jack in a confined area or leave it unattended while inflated under a car.

The design of an exhaust jack includes a hard core to ensure a greater amount of stability when lifting the car. Plus, a two-way inflation system allows you to control the rate of lift and how high the car is lifted by the air being pumped into it from the exhaust pipe. The bag is completely collapsible so it can be stored flat, like a deflated beach ball. When it comes to convenience, power, and versatility, nothing beats an exhaust jack for nearly all situations where your off-roading vehicle needs to be lifted.